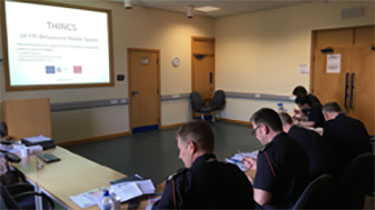 Phil Butler of Cardiff University paints us a picture of his busy working landscape whilst working on behalf of the National Fire Chiefs Council (NFCC) to undertake his project to further evaluate THe INcident Command Skills (THINCS) behavioural marker system for the UK Fire and Rescue Service (FRS). The project involves the involvement of East Sussex, Hampshire, Scottish, South Wales, South Yorkshire, Tyne and Wear, and West Yorkshire FRSs.

‘The first two months of the THINCS Evaluation project were largely taken up with designing and delivering THINCS rater training to personnel from UK FRS’ Butler says. Prior to receiving the training participants must complete pre-course learning that familiarises them with the system. This is largely comprised of undertaking the command skills and behavioural marker systems training modules designed for incident commanders. The THIINCS Raters training course takes place over three days. The first day is a dedicated theory day and covers subjects such as accident causation theory, human error, and psychometrics. The next two days take the participants through the system and involves many practice sessions. The afternoon of the final day is given over to theory and practical summative assessments. “It’s a tough course and not all [participants] pass the theory assessment, so some had to retake it at a later date with a different paper” says Butler. He goes on to explain that “48 UK FRS personnel have qualified to use THINCS and by the end of November all seven FRSs will be using the system to conduct formative assessments of incident commanders”. 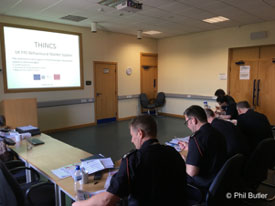 The third month has been taken up with work generated by the completion of the training. For example, marking the practical assessments and providing each participant with personalised feedback on their use of the system. Whilst this time consuming process was ongoing Butler also worked with the lead officers from the seven UK FRSs to establish their plan of engagement with THINCS. This included resolving a variety of issues such as setting up a schedule of THINCS rating activities, establishing administrative support, and purchasing Android tablets to use the THINCS app developed with Bristol-based company, MyOxygen.

Yet THINCS rater training is but one feature in Butler’s busy working landscape. He has also produced an updated version of the THINCS Users’ Guide and developed a streamlined training package for Retained and Volunteer FRS incident commanders. The NFCC has co-opted him onto a number of incident command-based projects to help develop them from a behavioural perspective. These projects include the national leadership strategy and one centring on developing national standards for incident command competence. He has contributed his expertise at a number of meetings and provided input detailing a project’s behavioural components. Butler has also promoted the THINCS system, for example, by delivering a presentation to the South East Operational Response and Resilience Group at the Royal Berkshire FRS HQ in September and in an article for the British Association of Public Safety Communications Officials (BAPCO) online journal for October.

The next three months will see the continued promotion of the THINCS project, support for the seven FRSs participating in the evaluation of THINCS, and project work for the NFCC. In addition, research into the system’s sensitivity and fidelity will start and it will be used as a research tool to investigate the impact of stress and anxiety upon incident commanders.
Butler sums up his experience on the project so far “It’s a lot of work, but it’s so interesting. I am indebted to all the seven UK FRSs for allowing me access to their personal and to them for allowing me to take up substantial amounts of their precious time! I am working with some wonderful people in the NFCC and learning a lot about their priorities and how they operate. Basically, the Trust’s funding is giving me an amazing experience I could not have had without it.”